Today, I was featured on The F24 Debate in a panel discussion of Barack Obama's Middle East policy six months into his presidency.

You can catch the videos by following these two links to the France24 website. 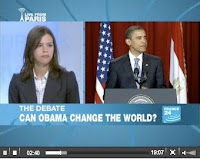 Can Barack Obama change the world?