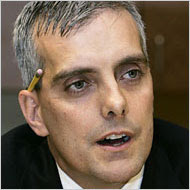 The New York Times published a short profile about the evolving role of Denis McDonough, President Obama's very closest advisor on national security. A member of president's innermost circle, Obama confers regularly with McDonough before, during, and after making any important decision. And when the emerging consensus among high-ranking administration officials (like James Jones, Robert Gates, Hillary Clinton) on a security issue does not resemble the president's thinking, it is McDonough who delivers the message to them. The article points to the Afghanistan strategic review as an example of this.

McDonough's is the president's protector, the guardian of his image, and the "tough guy" who routinely admonishes and berates those (journalists, high-level officials, wonks) who he believes have strayed from the message or spoken unjustly of the president.

Obama and McDonough's close link dates back to the early days of Obama's presidential campaign when McDonough, formerly at the Center for American Progress and previously advisor to Tom Daschle, quickly signed on despite Obama's outsider novice status. He vigorously campaigned for the president and helped him to navigate Washington and the Democratic policy establishment.

Link: The Saturday Profile - The Advisor at the Heart of National Security (NYT)