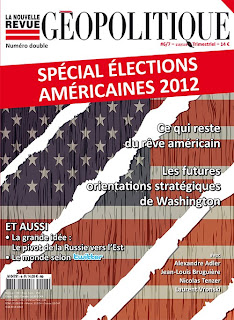 In the most recent issue of Nouvelle Revue Géopolitique, I contributed an article, "Portrait d'une Nouvelle Amérique."

The text focuses first on how Americans view the role of the US in the world, their evolving foreign policy preferences, and the impact of the economic crisis on public perception of America's responsibility and ability to pursue its foreign ambitions.

It goes on to decrypt Obama's and Romney's foreign policy visions, how they correspond to public opinion concerning external action (China, Iran, Israel, interventionism, among others), and the global leadership framework into which they most closely fit.

Finally, the article looks at how the emerging Millennial/Boomer generational divide reproduces itself within American public opinion on foreign and defense policy orientations; as well as how the arrival of the Millennials - accompanied by the profound sociological and intellectual shift they represent - will compel new political responses from US leaders due to the very different foreign policy ambitions and approaches they espouse.

Stop by a newsstand to pick up this Special Elections issue!