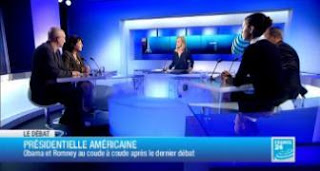 Last night on France 24's Le Débat, hosted by Vanessa Burggraf, we were a panel of four to discuss the result of the final presidential debate, the state of the race heading into the final two weeks including the keys to victory, and the contrasting foreign policy visions of the two candidates (including Obama's first term foreign policy).

Also on the panel were Philip Golub, Stuart Haugen and Anne Kraatz.

Video (in French) after the jump.