SECRETARY OF DEFENSE ROBERT GATES SIGNS ON FOR ONE MORE YEAR 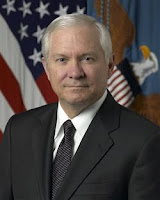 When Defense Secretary Robert Gates agreed to stay on in his current position for the new president Obama, many speculated that his tenure would be short - just long enough to ensure smooth policy transitions regarding Iraq, Afghanistan, the defense budget, and re-balancing the relative weight of the Pentagon. Surely, Gates's clout in political and military circles, won during service to five presidents and thanks in part to his oversight of the Iraq surge, would be critical to a non-military, "untested" president.

Gates has proven indispensable to President Obama, playing an integral role in shaping the recently-announced Afghanistan strategy to send an additional 30,000 US troops with additional contributions to be made by NATO and other partners.

Secretary Gates will stay on for at least an additional year.