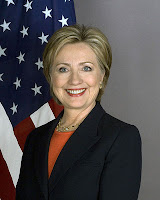 After more than one year into her self-declared one-term tenure, the place Hillary Clinton occupies in US diplomacy is unclear – and questions remain as to how she hopes to shape the office. Is it her goal to mark the American diplomatic heritage with a so-called Clinton Doctrine? Or is she exercising her functions such as to coalesce her abundant international popularity to become a transcendent figure?

Sticking to the job she currently holds, we have some indications of Clinton’s foreign policy style. Early on, she embraced “smart power” as a key to revitalizing US diplomacy, and her foreign trips reflect such a policy – she often holds both high-level meetings and town-hall style events especially targeting young people and students, and namely women and girls. Obama has made this type of outreach a hallmark of his own style, too, so the grassroots approach is not strictly a Clinton innovation (though her celebrity is easily instrumentalized for this purpose). And indeed, the excitement Clinton incites during her travels proves that this approach can be successful.

Speaking of substance, there is disappointingly little to evaluate. Her colleagues at State appreciate her dedication to their internal concerns, from improving the nuts-and-bolts of agency functioning to fighting for increased funding and resources in a way past secretaries have not. Otherwise, and looking outward, Clinton is increasingly assuming the mantle of women's/girls’ rights (a lifelong commitment and political passion), advocating for gender equality grounded on an efficiency-based argument rather than rooted in a moral-imperative. It would be no surprise if Clinton dedicated her post-administration, and post-political, work to advancing progress on this front.

Additionally, appointing envoys was Clinton’s idea. After seeing how little SecStates achieve when spread too thin over too many issues, Clinton was determined assign heavyweights to manage the most demanding issue areas. But with Mitchell coming up short in the Middle East and Holbrooke’s tense relations with Afghan principals including Karzai, there are few concrete successes here to mention.

Until now, Clinton has succeeded in reinvigorating the world's perception of American power via an unrelenting global “hearts and minds” campaign. But she has neither made her mark on any one dossier nor delivered a resounding policy success (cf. failure to secure Brazilian support on Iran sanctions; the Jerusalem gaffe). Much of this is a mere question of time. But the Clinton/Obama dynamic itself may also be at play. The two former rivals will never share the seamless mutual confidence, allowing the secretary to act as proxy for the president, that made other President/Secretary pairs so successful (think Bush/Baker; Nixon/Kissinger). And by sending Biden around the world to problem-solve instead of Clinton, Obama may be signaling the limits of her power. Certainly, Obama gave Clinton full control of Foggy Bottom (including hiring decisions) – but in doing so, did he also marginalize the agency by placing it apart, making it a Clinton sphere that operates at a distance from other key power centers?

Time will tell how Clinton works to define her mandate as Secretary of State, where she will seek to score big wins, and ultimately, how her decisions will translate into imperatives for American action abroad.