SPOTLIGHT ON...: IAN KELLY, US REPRESENTATIVE TO THE OSCE 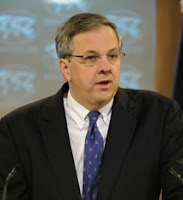 Pending confirmation by the US Senate, current State Department spokesman Ian Kelly will move to Vienna as the US's representative to the Organization for Security and Cooperation with the rank of ambassador.

Kelly has significant knowledge of Europe and a regional expertise in Eastern Europe/Russia. The State Department spokesman since May 2009, Kelly spent the first months of the Obama administration as deputy assistant secretary for European and Eurasian Affairs. From 2007-2009, he was director of the Office of Russian Affairs overseeing Russia, Ukraine, Moldova, and Belarus. From 2004-2007, he spent time at the US Mission to NATO as a public affairs counselor.

During the Clinton administration, Kelly was the State Department's Director of Democratic Initiatives to the Newly Independent States during which time he helped to coordinate democracy-building efforts in both former Soviet republics and in Russia.