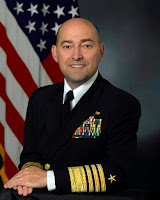 The list of challenges largely echoes the political imperatives set forth by Secretary Clinton and Ambassador Daalder during their own recent visits to Paris and demonstrates the coherence in the Administration’s line on its policy priorities. The real challenges evoked by Admiral Stavridis can also be read as a wish list, a call to action even, of ways that the US would like to see Europe increase its leadership vis-à-vis the transatlantic relationship.

Beyond the list of challenges cited below, the Admiral vividly advocated that Europe get on board to forge meaningful strategic cooperation with Russia including eventual missile defense, to increase Euro-American manufacturing and industrial ties in the construction of defense materials, and to carve out a more significant role for Turkey in order to maximize its potentially prodigious geopolitical ramifications for the West (but stopped short of calling for EU membership).

-Demography: especially the decline in Europe’s population
-Afghanistan: progress is steady, but new avenues of cooperation are essential (public-private partnerships) as is increased focus on civilians (literacy, education initiatives) and better communication with populations
-Ballistic Missiles: many of which are in attack range of the EU
-Terrorism: ultimately a law enforcement issue to be supported by military competences; highlighted point that terrorism poses direct threat to EU soil
-Narcotics: high human costs (deaths, addiction, trafficking of persons) as well as robust financing source for terrorism and corruption
-Flow of Illegal Immigrants: vulnerability to the entry of persons with weapons (possibly nuclear)
-Pirates
-Cybersecurity: special need to protect finance and transportation structures
-Natural Disasters and rapid response capability
-Managing Public Perception of NATO’s actions in the world

Passing mention was also made to Energy Security, more specifically to water, as the Admiral advocated for markets to handle resource management and for governments to manage the related infrastructure issues.