The government of French President François Hollande, led by Prime Minister Jean-Marc Ayrault, took office yesterday, on May 17.  Among the 34 ministers in Hollande's cabinet (of which half are women), three people in particular are likely to be especially visible to international audiences. They are Foreign Affairs minister Laurent Fabius, Defense Minister Jean-Yves Le Drian, and Finance Minister Pierre Moscovici.

Potusphere takes a quick glimpse at these men and their careers so far. 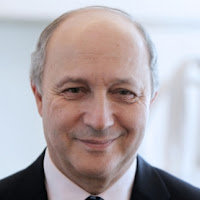 Fabius, 65 years old, is one of the few "elephants" (familiar term to describe top Socialist Party leaders) to find a place in the new French government. He was previously Minister of Finance (2000-2002), Industry and Research (1983-84), and Budget (1981-83). From 1984-1986, Fabius served as France's youngest prime minister (just 37 years old) under another Socialist president, François Mitterand.

Laurent Fabius was also twice president of the National Assembly (equivalent of Speaker of the House) from 1997-2000 and 1988-1992, serving from 1995-97 as the president of the parliament's socialist group (leader of the opposition) when the Right won the majority.

In the 1980s, Fabius successfully campaigned for French sanctions against the South African apartheid regime, publicly pushed back against communist Poland, and decried Castro's Cuba. But Fabius is most known for his vocal opposition to the European Constitution Treaty in 2005, which ran contrary to the position France's and Europe's socialists, who lined up in support of the treaty. Fabius presided over other key moments in Europe - namely the passage to the euro and the creation of the major French energy conglomerate Areva. On assuming his foreign affairs post on May 17, Fabius said: "I am profoundly European, but we need a different Europe, one that is more oriented toward jobs."

In 2009, Fabius expressed his opposition to France's reintegration into NATO's integrated command.

Fabius was a rival of François Hollande within the Socialist party, ran against him in the Socialist presidential primary before supporting party secretary Martine Aubry's bid. Once Hollande was elected the party's candidate, Fabius lent his support and expertise to Hollande - traveling abroad on the candidate's behalf and mapping out the new president's first 100 days in office. Fabius was named foreign affairs minister not for his proximity to the candidate but rather for his experience, expertise, and gravitas. The nomination is also viewed by some as an effort by President Hollande to represent the different currents of his party within his administration. 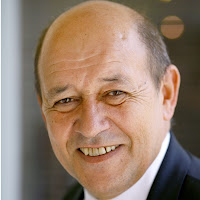 Le Drian, 64 years old, is a longtime friend of François Hollande and early supporter of his presidential campaign. He is from a modest family in Brittany, from a town (Lorient) with close historical ties to the French military. He first registered with the Socialist Party after hearing François Mitterand speak and entered politics at the local level in 1977 before being elected to the National Assembly just one year later at the age of 30. Le Drian spent much of his political career connected to Brittany (serving as mayor of his hometown, member of parliament representing that area). From 1991-92, Le Drian was the secrétaire d'Etat à la mer, a ministerial post overseeing, in part, coastal and sea affairs. Most recently, he was the president of the Brittany region (a job perhaps equivalent to a US governorship).

Once in 2007 and again in 2009, former president Nicolas Sarkozy proposed the helm of the defense ministry to Le Drian, who twice refused on the grounds that he did not want to serve in a government that was not Socialist.

During the 2012 presidential campaign, Le Drian was in charge of defense and security questions for François Hollande. It is believed that Le Drian's friendship with the head of the French army will be an advantage.

Le Drian visited Washington once during the campaign, in March 2012. 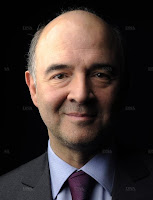 Pierre Moscovici, now 54 years old, was the youngest person to be elected Socialist Party secretary (at just 33 years old in 1990). In 1992, he became Party treasurer.  Moscovici held other leadership roles within his party while becoming close to former prime minister Lionel Jospin.

Moscovici was first elected to European Parliament in 1994, where he served until 1997 before becoming France's Minister of European Affairs (1997-2002). During his time as Minister, Moscovici helped to prepare France's EU presidency (beginning of 2001), helped to negotiate the European Constitution Treaty.

In 2004, Moscovici was once again elected a member of European Parliament, where he served until 2007 and during which time he served as one of its vice presidents. In 2007, he returned to the French National Assembly.

Considered to be a leading figure in the Socialist party's social-democrat current, Moscovici was an early supporter of François Hollande's presidential bid and served as Hollande's campaign director.