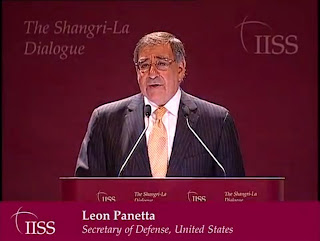 On June 2, US Secretary of Defense Leon Panetta delivered a keynote address at the IISS's Shangri-La Dialogue in which he outlined in greater depth more specific elements concerning the US's shift toward Asia-Pacific, fleshing out the context, driving principles, and physical and material investments to which the US is committing over the next several years, beginning now.

The overall context is one of constraints - namely economic - and of course the need to adapt to the profound changes underway caused by the emergence of Asia Pacific as a major global pole. The official line is to accomplish more with less, and to act more effectively within a series of defined limits and fixed objectives.


Most of the speech, however, was spent elaborating the four underlying principles and going into details about what the policy consequences would be.

What are the four basic principles outlined by Panetta?

More after the jump...

1. International order, meaning the creation of a set of binding normative rules applicable to all Asian actors, extending not only to ASEAN member states but also to China. Focus on free trade, rule of law, open access, and diplomacy as dispute resolution.

2. Partnerships. The aim is to modernize and deepen ties throughout the region while also working to strengthen America's links to China. Special mention was made of the strategic importance of both Japan and South Korea. In Japan, Panetta announced the shift of US presence from the politically untenable Okinawa to Guam, a future US military hub in the West Pacific. With Korea, the US Defense Secretary announced a decrease in ground forces but a commitment to maintain a "significant presence" there.

3. Presence, or maintaining traditional alliances in Northeast Asia while building presence in Southeast Asia and the Indian Ocean. Panetta went into some detail about the US's Marine Corps and aircraft delpoyments in northern Australia. He also invoked deepening relations with Thailand and closer work with the Philippines namely on counterterrorism and maritime presence.

China was cited as a key piece of the regional puzzle, described by Panetta as both an immense opportunity not without its challenges. Despite the natural friction that may come to characterize periods of the bilateral, Panetta remained clear on a general desire to improve "the strategic trust" between the two countries. Some of the areas he mentioned for closer work are the following: mil-to-mil relations (finding trust and "common approaches to...shared security challenges."), humanitarian matters, and counter-drug and counter-proliferation efforts. He added a word about wanting China to be a responsible actor in cyber and outer space.

4. Force Projection. This US budget is the first to take into account serious investments in Asia Pacific as part of the "pivot policy." Here Panetta underlined that the US will retire old Navy ships and replace them with newer technologically advanced ships, will "increase the number and size" of its exercises in the Pacific, and up the number of port visits especially in the Indian Ocean. A core to the US's strength will be forward-deployed forces supported by the ability to quickly project military power if needed. Some capabilities on the US's radar are an advanced fifth-generation fighter, an enhanced Virginia-class submarine, electronic warfare and improved precision weapons. Panetta cited new investments in aerial-refuelling tankers, a bomber, advanced maritime patrol and anti-sub warcraft, to be coupled with a new conception of operations to be guided in part by the January 2012 Joint Operational Access Concept.

The Regional Push
The extent to which the US aims to play a greater role not only at the bilateral level but also in participating in and promoting regional structures, infused with American values, may come as no surprise. This preference is already in practice in Europe with NATO for example. In Asia, the US argues for a set of binding "rules of the road" to which all countries in the region, China included, should be held accountable.

The US preference for regional structures is understandable in the context of its policy goals, as the administration is intent on building a regional structure that includes - but also binds - China. Their hope is to avoid creating a Cold War dynamic of containment (similar to what was done with Germany after World War II) that would otherwise seriously impede long-term engagement with the rising giant.

What About Europe?
There is enough in Panetta's speech to sound alarms for anxious Europeans, who fear the shift to Asia represents a definitive turn away from the Continent's traditional alliances. The administration spends a great deal of time reassuring Europeans that the rebalance has little to do with Europe and more to do with adapting the US diplomatic, economic, and military apparatuses to new geopolitical realities. They cite the hard number of American forces remaining in Europe even after the cuts, while also recalling the number of visits made both by President Obama and Secretary Clinton.

Many Europeans are not convinced. Indeed, in perhaps a case of unfortunate timing, Secretary Panetta said "defense spending in Asia is predicted...to surpass that of Europe this year" before immediately continuing on to say that "given these trends" the "United States will play a larger role" in Asia Pacific. A bit later in the speech, Panetta draws out the implications of the shift, specifying that the US Navy will move from a 50/50 Pacific/Atlantic split of its forces to a 60/40 one. These linguistic and policy elements do not diminish the perception that the pivot was caused in no small part by a so-called deficiency in Europe's defense spending, making it less of a priority and setting up Asia Pacific as the new hub of opportunity.

As the US works to minimize the challenges and maximize the benefits of Asia's rise, it will be increasingly important to engage Europe to help build coalitions to confront the challenges and to act to draw forth greater advantages from Asia. Judging by the address delivered by French Defense Minister Jean-Yves Le Drian, France may be willing to play a dynamic role in accompanying and managing this geopolitical shift. ("France is intending to remain a fully-committed player for security and stability in Asia."; "The French are willing to participate in establishing a regional security structure in South-East Asia").